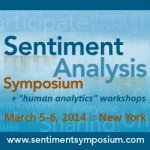 SAS 2014 continued to push past its origins as a sentiment-only conference to one on the cutting edge of what organizer Seth Grimes named “human analytics” and what I’ve dubbed “humetrics.” Whatever it’s called, attendees seemed to be operating with the knowledge that capturing and analyzing social data – what people do, say and feel, goes well beyond the traditional and impersonal demographics, participation rates or transaction volumes that tell us “what” but not “why.”

Here are the highlights from my perspective on understanding people:

Really looking forward to the 2015 edition.